The Layman Report is a document in which it is explained to the general public the results of the project. Consequently, the language is simple and comprehensible to all the public. Recently, this report has been inserted in this web. Therefore, we want to awake your attention.

We invite you to inter into this document, in which the zámak injection process, the waste this process generates and its capability to be valorised for the achievement of Zinc Oxide is explained. The Zink Oxide (ZnO) is an inorganic chemical compound that is used in several processes, such as the chemical catalysis and the vulcanisation of rubber pieces.

That is why the GREENZO project has developed a pilot plant for the valorisation of this waste in ZnO. This has been characterised and its suitability for its use in the two established application demonstrated. The results have been truly encouraging. 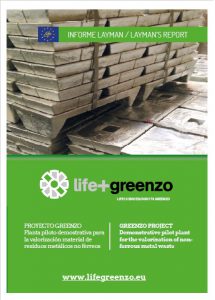